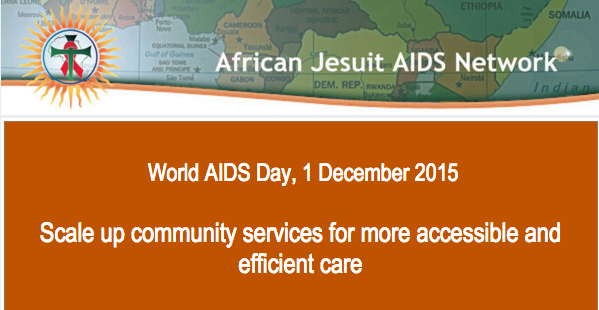 Make all treatment for people living with HIV free-of-charge, more easily accessible and constantly available. And remember that medical care does not stand alone: when needed, give food together with antiretroviral drugs (ARVs), and don’t forget moral support – because there is an inseparable link between self-acceptance and seeking treatment and support.

These are the ingredients of good care, according to nearly 900 African people living with HIV, who were interviewed in research coordinated by the African Jesuit AIDS Network (AJAN) between late 2013 and mid-2015. Most respondents came from Kenya, Malawi and Zambia and the rest from South Africa, Tanzania, Zimbabwe, Burundi, Democratic Republic of Congo (DRC), Ivory Coast and Togo. The research gauged the extent of access not only to antiretroviral therapy (ART) but also to comprehensive services that guarantee proper management of HIV and AIDS.

Today, World AIDS Day 2015, AJAN backs the pleas of the people living with HIV and calls for the scale-up of healthcare services at local level to address the needs they raise.

The AJAN director, Paterne Mombe SJ, said: “Massive steps have been taken to make ART available to all who need but gaps still remain. In this research, it is people living with HIV themselves who have told us what they need, what works for them. What emerges clearly is that they need more community-based, affordable, efficient and comprehensive delivery of healthcare services to make universal access to treatment a reality. Let’s work together to make this happen.”

Two-thirds of the people we interviewed appeared to be happy enough with their access to ART, rating it as “good”. However they cited many obstacles, especially the lack of nutritious food; the distance to reach their clinic; understaffing and delays in treatment once they got there. Emerging to a lesser extent was the negative attitude of some staff and people living with HIV: disrespect in the first case and self-stigma in the second. Also mentioned were shortfalls in supplies of ARVs, other medicines and testing materials, and broken or inadequate facilities in clinics. And where treatment was not free, cost remained a serious issue.

While the vast majority said their ARVs were free of charge, one-fourth said they could not always afford prescribed medications for opportunistic infections. And 15% said they had missed important medical tests because they could not afford them. “ARVs alone are not enough,” said one respondent from DRC. “Tests, medicines for opportunistic infections and good nutrition need to be given too.”

The plea for nutritious food to complement ARVs was one of the most foremost recommendations for better services, often coupled with a call to facilitate income-generating activities, to meet one’s own needs: “Sometimes they ask us to eat healthy food and a balanced diet, which we cannot afford. We can only eat the available food.”

However the most pressing need to emerge was to have treatment closer to home. A substantial 43% said they found it difficult to reach their clinic. One-fourth said the clinic was too far away, nearly one-third said they could not afford the transport, and 10% said no transport was available at all. Nearly half said they went on foot or by bicycle – but this did not necessarily mean the clinic was close by. For some, it was three or four days away by walk.

The other big problem for our interviewees was never-ending queues at the clinic. One respondent who travelled for three days to reach the hospital once waited in the queue for seven hours.Half of the respondents said the clinic staff sometimes kept them waiting for hours because they were too busy. “The health personnel are after clearing the queue so no time for questions,” said one.

However, although one-fifth of respondents complained about the negative behaviour of the clinic staff, most gave them a vote of confidence, describing them as “approachable”, “free”, “friendly”, “ready to help”, “professional” and trustworthy.

A few attributed not only their improved health but also acceptance of their HIV status to the healthcare staff. And this was a key factor: the people we interviewed made a strong link between self-acceptance and seeking treatment and support. When asked how they felt about their treatment, their answers nearly always stemmed from their attitude about themselves. Those who were comfortable with their HIV status, “I’ve nothing to hide”, had no problem to open up to ask for help. This was the case with most of the interviewees “because I accept my health status the way it is”.

Such people were eager to have as much information and education as possible about AIDS and to help others: “I am ready to share and also encourage others.” They found their clinic appointments useful because “I always feel that it’s good to ask in order to know about my health.” The thirst to know more is directly linked to the desire to be well, “my health comes first”.

But people gripped by self-stigma and fear of stigma – and they appeared to be a minority in this research – had a different approach. They were reluctant to approach healthcare staff because of feelings of shame and unease and “fear of discrimination” and being judged.

The people we interviewed called for more counselling and more information about their medication and how to live with HIV. As one said: “I count myself lucky because I found a place to get treatment and also to join a support group. People who got HIV before me were dying because of stigma but today people are informed. But more needs to be done because there is still need of information every day.”