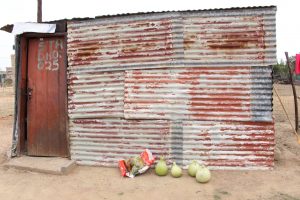 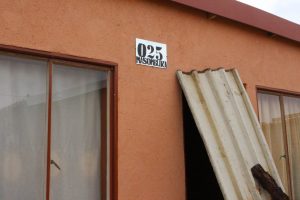 Over the past ten years the SACBC AIDS Office has included among its programmes a house-building project.  There is nothing elaborate about the two-roomed, very simple houses that are constructed for poor and vulnerable families in rural areas.  But for many it’s a great improvement from the falling down structure that some previously called their house or from a house constructed of iron and/or plastic sheeting. Read more….

One may need a reminder that although South Africa is a middle income country it has huge disparities between the rich and the poor which is evidenced in both rural and urban areas.  In fact many people from rural areas migrate to the cities in search of job opportunities not available to them in the rural areas.  Their dreams are however often dashed because of high levels of poverty and unemployment and of course poor housing.  Sometimes the beneficiaries who are helped with a house, as is the case with this project, are people who have been left behind to eke out a living while bread winners move elsewhere in search of opportunities for employment.

The beneficiaries of the houses often come from very over-crowded circumstances with people living on top of one another in confined spaces, not enough privacy between boys and girls, and no place for children to study.  When a house such as the ones that are built by the SACBC AIDS Office is constructed beneficiaries often continue to make use of the old space they had for some members  of the family or as a kitchen while at the same time occupying the new and extended space.  Many people in South Africa have long been waiting houses promised by the government which have however not always been forthcoming.  The houses built by the SACBC AIDS Office provide a substitute for those in specific cases.

When people see the realities in which some of the poor live, or even just pictures, they are horrified that such conditions exist.  And so it is heartening to be able to make some improvement, however small. Usually it can be said that there is an average of about five people, children and adults, living in a house.  Sometimes the numbers are far higher.

Another old house made of iron sheets
Because the beneficiaries are identified by people working at diocesan level in conjunction with local communities, it is true to say that the beneficiaries are part of the Church’s network.  Some have already received other services provided locally by the Church, eg support to keep children in school, or food parcels, or assistance with accessing the social grants available to some of them from the government.  This means that there is some form of ongoing support available. In addition people are helped with starting food gardens or with some form of skills training that would make them a bit more independent.  Some of the training opportunities include baking, sewing, and developing computer skills.

Particular problems experienced relate to being able to identify who the beneficiaries will be among the many who qualify.  Some will need to wait till another time given funding constraints and other limitations. Getting the actual building done is sometimes problematic when materials are not delivered timeously or when builders make demands for additional money before completing a project.  Interestingly enough because of the long experience that the AIDS Office and its diocesan partners have had, there have been many learnings about the best way to proceed and usually a way out is found. Sometimes it may mean identifying a new builder or a new supplier, and indeed also a new beneficiary.

The new house alongside the old one.