BREAKING THE CYCLE OF DEPENDENCY: SWAZILAND SHOWS THE WAY

In existence since January 2000, the SACBC AIDS Office has frequently had to change its focus and priorities, to adapt to the latest realities of the AIDS pandemic in Southern Africa. Initially its focus was on the provision of home based care and residential palliative care to sick people. When treatment became available, it was in the forefront providing ART through Catholic health care facilities. As the government ARV roll-out began to take root, SACBC AIDS Office scaled down its own treatment plan, and began focussing more on the provision of comprehensive care and services to AIDS orphans. Today, many of the orphans have finished school, and are too old to benefit from the SACBC AIDS Office’s orphan program. The latest challenge is to find sustainable livelihoods for them. It would indeed be a waste of human potential if they were to remain on government social grants for most of their lives.

Problems faced by AIDS orphans in Swaziland are particularly severe. The country’s total population is 1,2 million. 120 000 of them are orphans. Swaziland has the highest percentage of HIV positive people of any country globally (26,5% of the population). Extreme poverty is widespread – 63% of Swazi’s live on less than US$1 per day (all statistics from www.unicef.org ).

In 2014, the SACBC AIDS Office partnered with Misereor, to implement a project aimed at providing orphans the skills that would enable them to find sustainable livelihoods in the building and construction sector, simultaneously providing adequate housing for themselves and other orphan-headed households. 15 orphans were selected (based on need) to undergo the building and construction course at the Manzini Industrial Training Centre (MITC). Training took place over the period July to September 2014. All of them passed with good results.

In the second phase of the project, the newly trained orphans constructed new 24 square meter, two-roomed houses for destitute orphans. This was to give them the practical experience of building houses. The program is on track – to date, four of the seven planned houses have been built. Only three remain. The new houses are of good quality. Bishop Jose Luis Ponce de Leon has visited them, and is impressed.

It is hoped that the success of the Swaziland project can be duplicated in other areas. SACBC AiDS Office has already started doing this in KwaZulu/Natal and Limpopo. 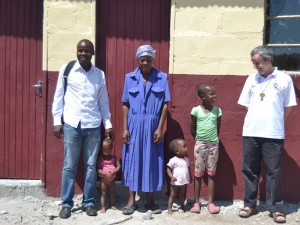 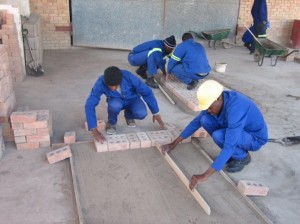 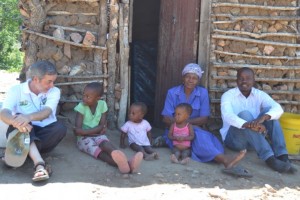 Bishop Jose Luis Ponce de Leon with Mrs Makhubela – a widow who looks after her six orphaned grandchildren – in front of their old hut. 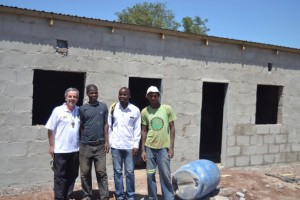 Bishop Jose Ponce de Leon, with Machawe Ngcamphalala of the Diocese of Manzini (second from right) and two trainees, during construction of Mrs Makhubela’s new house. 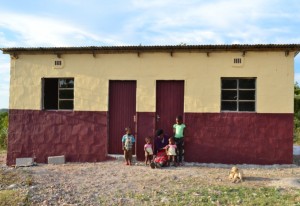 Mrs Makhubela and four of her orphaned grandchildren in front of their new house.