News from Phalaborwa Parish: 71 households/families  were helped, and  132 children – 75 boys and  57 girls – received school uniforms.  Other families were helped in Ofcalaco parish.

The “Mabuza” family consists of mother and 4 children under 18 years (and a 22 year-old daughter) and 2 grandchildren, all of whom are without IDs, although the mother says she has lived in South Africa over 20 years.  So the family has no income except when the mother gets casual work at farms in the Tzaneen area. The family’s ‘mud’ house collapsed during the recent heavy rains and the family is now living in a tent!  The  mother was really pleased three of her children were given uniforms.

The “Dlamini” family, who live in an RDP house,  consists of two girls and one boy, headed by the 16-year old sister.  The mother died last year while visiting Mozambique.  A relative who lives about 50 to 100 metres away  now receives Child Benefits for the two younger children and provides food for the family but does not live with them.

The “Manzini” family :  two children , a boy of 9 years and a girl of 6 years, live with a foster-mother who was their father’s second wife and who is, herself very ill and really unable to  care for the children properly.  The children are not receiving grants because they have not been registered at Home Affairs. (We are working to rectify this).  The foster mother was delighted to see them come home with uniforms.

The “Nhlengethwa” family: two boys  aged 9 and 15 are living alone  but supervised by their aunt who is one of our Carers and lives about 25 metres from  their home.  The mother of the children who previously lived in Phalaborwa moved to Rustenburg some years ago without the boys.  The two boys followed the mother to Rustenburg in December 2011, but they were not registered at school in Rustenburg and they returned to Phalaborwa in 2012.  They are now attending a local primary school and the aunt was pleased that the boys , who do not have IDs , received uniforms.

It was exciting to see many of our children dressed in their new uniforms.  It was also exciting to watch the children excitedly opening new wrappings on blouses and shoes etc.  It was like Christmas again! 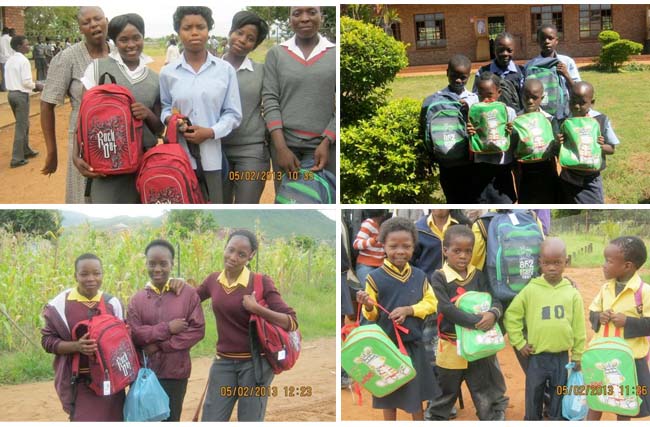