Denzil Jonas from De Aar heading off to Washington DC 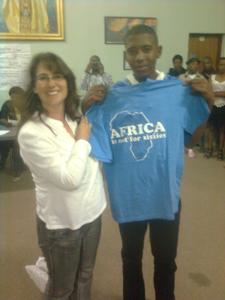 Sixteen year old Denzil Jonas from Nightingale Hospice Children’s Center in De Aar, Northern Cape has been chosen to participate in a learner exchange program in the USA. After filling in many application forms, writing essays and attending a panel interview in Cape Town, Denzil made it to the final six who will be jetting off to Washington DC, USA in July 2012.

The AFS Intercultural Programme provides scholarships for South African learners who display high academic ability and leadership skills to study in the US for a year while living with a host family. While attending school in America, Denzil will also have the opportunity to participate in various leadership camps, youth seminars and will be an ambassador for South Africa,  creating awareness of issues which the youth in our country are facing. Pictured here, Avie Cherrington (OVC Project Manager) informs Denzil that he has been selected and presents him with a gift from the SACBC AIDS Office during the 2012 Free State Career Camps.

Another applicant from the St Elizabeth Children’s Programme in Reitz, Free State was also selected into the semi-finals and we are still waiting to hear whether he has also made the final selection.