Catholic Responses to AIDS in Southern Africa, 30 years after the discovery of HIV. 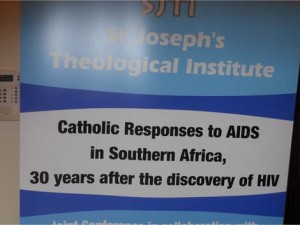 The first phase of the conference highlighted the Church’s response to AIDS globally, continentally, nationally and locally. The change in South Africa’s national context since the inception of the government’s ARV treatment program and the simultaneous decline in funding to churches and NGO’s make it clear that the Church’s response, going forward, should focus less on providing treatment and material care, and should focus more on the Church’s “core business” – attending to the spiritual and pastoral care of those infected. Is the Catholic Church in South Africa prepared for this? The second phase of the conference featured speakers dealing specifically with this – some of them addressing this issue directly, and some addressing it indirectly, through theological reflection. Collectively, the various presentations made it clear that there is still much that needs to be done.

Prof Philippe Denis OP presented the results of research conducted by interviewing people living with AIDS in the Pietermaritzburg area. His research showed that women in particular are becoming more assertive, and less inclined to submit to domestic violence and stigma. But several of them expressed “anger towards God” – showing that the spiritual and pastoral needs of people with AIDS are not being addressed.

Dr Stuart Bate OMI spoke about constructing a theological model to inform the ministry of HIV and AIDS prevention. Questions raised after his presentation revealed a level of ignorance amongst attendees, many of them religious leaders, about medical aspects of AIDS (for example the threat of infection with discordant couples where the infected partner is on ART and has an undetectable viral load) that should not be present 30 years after the discovery of HIV.

Fr Raymond Mwangala OMI is the Academic Dean at St Joseph’s Theological Institute (SJTI). He emphasised the need for “main-streaming” HIV and AIDS in the training and formation of priests and religious – this is still not happening. During the past thirty years, the theological journal “Grace and Truth” only published two issues dedicated to HIV and AIDS. The prospectus of SJTI featured a module dealing specifically with HIV and AIDS for the first time in 2012.

Clifford Madondo’s research shows how grassroots involvement of the faithful living in poor communities led to the emergence of home based care and orphan care networks. Initially these were seen as ways of expressing their faith through compassionate service to their neighbours. Over time these projects came to be seen as a way of getting employment. Today there are very few people who are willing to serve their ill, HIV positive neighbours without any form of remuneration. In many cases (in all denominations), those who served their HIV positive neighbours through grass roots Christian efforts became discouraged by the aloofness and lack of support from their pastors.

Toni Rowland looked at the impact of HIV and AIDS on family life. She also found ignorance amongst Catholics regarding the teaching of the Church, as well as widespread reluctance amongst Church members to engage with and discuss the topic.

Sr Alison Munro discussed the issue of testing candidates for the priesthood and/or religious life. Despite the Church being in the forefront of providing care “out there”, it is uncomfortable dealing with HIV and AIDS amongst its own clergy and religious or applicants for the priesthood or religious life. Progress has been made in recent years, particularly in view of the widespread availability of antiretroviral treatment (in the past it was argued that being HIV positive would place an unbearable financial burden on the Diocese or religious congregation once the candidate required medical attention). Yet, many Dioceses and religious congregations still have no formal policies. Informed consent and the right to privacy can be problematic.