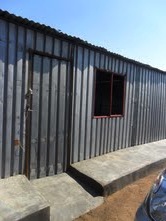 Twelve households benefited from the shelter project,  6 houses were renovated, six houses had broken doors and windows replaced.
Six houses were in a bad condition, they were built of mud and we could not repair them, but we managed to buy well built shacks ( Zozo houses) for them. These six households are now living under better conditions,  and they feel safe. They appreciated the intervention of the project and SACBC.

Family of “ Moraka” (not their real surname)

One family of 4 children was staying at the grandmother’s partner’s house and the situation was very bad for the children . The man was abusive to the children and the grandmother. When we registered  the family, child care workers assisted the family to look for their own stand, and the grandmother finally found her own place.  But she did not have money to buy building material and when we received the offer from SACBC they were the first household to be assisted and we bought a Zozo house for them. They are now safe and happy. The children used to be isolated,  they did not socialise with their peers, but since they have moved there is a difference in their behaviour because they feel safe. The matter was referred to the social worker and they are receiving counselling, the sessions are helping them. And the shelter intervention is also bringing an impact on the wellbeing of the children and the family. The Grandmother appreciated the part the project played in the lives of her grandchildren and herself.

Family of “Ngwana” (not their real surname)

This family with 4 children was living in a mud house with bad cracks. The father left the family and stayed with another partner and the mother is HIV positive.  That means these children are affected. The mother is also not well psychologically and the last child is also disturbed psychologically. The house could have collapsed  anytime, and we realised that we wouldn’t be be able to renovate it. We also bought a Zozo house to put them on the safer side. They are all happy and they are now having a better shelter.

Family of “Mobu”(not their real surname)

This family was registered in the project in 2011 and the children are orphans living with their aunt. The mother passed on in 2011 and the grandmother who fostered the children also passed on in 2011. There are two children who are HIV positive and they are on ARV treatment. In March 2012 the mud house they were living in collapsed. The sister of their grandmother accommodated them in a small house. When the offer came we also bought a Zozo house for the family and the house was built on the stand that used to be their grandmother’s place to replace the old house. They felt that the memory of their grandmother continues. They moved back to their own place together with their aunt and they are also happy and the grandmother who accommodated them appreciated our efforts as she also had a challenge about the space.