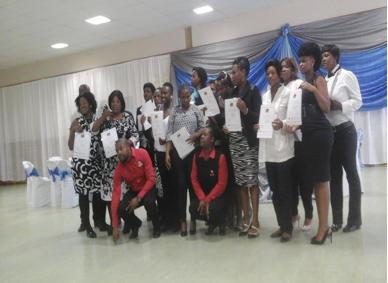 Anna Kaura represented the SACBC AIDS Office at the Familes Matter graduations at Emmaus Community Centre in September 2016, and submitted this report

There were six groups of 20 each graduating, and each group rendered an item to entertain the crowd, and was allowed one person to give speech about the highlights of their group and the things they learnt from the program. Parents were at ease to talk about sex related matters as they gave their testimonies about how the program helped them to speak to their children, and how relationships at homes between guardians and children have improved, and even between wives and spouses.

The program started at 10h00, with 115 guardians graduating. The hall was packed with parents/guardians who were beautifully dressed, and each group chose and wore a colour of their choice. There were also a few community members and children who accompanied their parents to get their certificates. Other stakeholders from the community were invited to the event. There were representatives from the Department of Health, DSD, POWA and Board members as well as Aurum and SACBC.

The day was also used to conduct HCT, check BP, screen for Diabetes, and do Pap smears. It was a huge success, with Emmaus exceeding its target of recruitment of guardians into the Families Matter! Programme. The guests gave talks and educated those present on gender based violence, how to check for signs of breast cancer.

The day went well and ended with the FMP team motivating those in attendance to spread the word about the programme in the community. 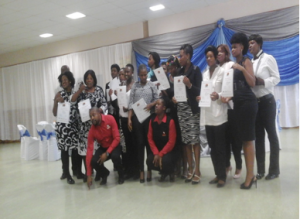 Parents/ guardians receiving their certificates in their training groups. The Facilitators are wearing red and black. 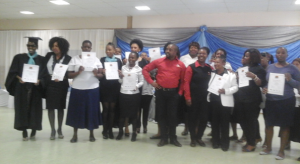