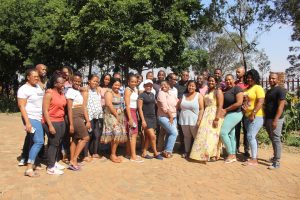 South Africa has an estimated 7.1 million people living with HIV (PLHIV), with a projected increase to 7.5 million by 2020. In 2017, PEPFAR and the NDOH set a goal for 6.1 million people to be on HIV treatment in the public health system by 2020 but to date only 4 million have been successfully linked to ARVs. 2 million are yet to be found and linked to treatment.

Fear of stigma, discrimination and violence are amongst the foremost barriers to HIV prevention, testing, treatment and support. Prevailing social and gender norms dictate acceptable behaviour within groups, communities and cultures. People adjust their behaviour to avoid rejection and stigmatization. HIV-stigma results in negative attitudes, beliefs and actions towards PLHIV leading to damaging self-beliefs and actions by PLHIV that can lead to negative health outcomes. Gender based violence (GBV) is high in South Africa—between 25% to 40% of women experience sexual and/or physical violence in their lifetime.

The fear of stigma, discrimination and violence discourages people living with HIV (PLHIV) from seeking information, testing, services, and access or adherence to HIV treatment. Feelings of compromised masculinity associated with seeking healthcare further form a specific barrier to male engagement in healthcare.

Loss to follow up (LTFU) is a significant disruption to the continuum of care for successful HIV treatment. Continuum of care includes testing, active linkages to care, treatment initiation, and adherence to HIV treatment, treatment and retention in care. The risk that a person might be lost to treatment exists throughout the process of this continuum but more during the later stages, after a few months of having received treatment. In South Africa only 55% of PLHIV have been found to successfully remain on HIV treatment during recent years. Prompt linkage and follow-up is critically needed in order to reduce LTFU. The uptake and retention in HIV care are also negatively influenced by high rates of unaddressed mental health problems and substance abuse amongst PLHIV.

Purpose of the program

One of the approaches to track and trace these people is to engage faith leaders to mobilize their faith communities to get tested if they have not already been tested and to advocate for adherence if they are on ARVs. To this affect, the FOCUS program will engage 2000 religious leaders across the country to preach sermons relevant to the epidemic today. These religious leaders of all faiths and denominations will be trained on aspects of HIV to enable them to be conversant on the subject and they will also be provided with a handbook of religious texts which they can use in their sermons.

The second approach is to empower and support community advocates (another name for community health care workers) to find those who are LTFU and their contacts and ensure that all that are eligible are immediately linked to treatment. This will be accomplished through reviewing clinic records and identifying defaulters as well as HIV + people in order to track and trace them. LTFUs will be immediately linked to treatment and their contacts will be referred for testing. Once on treatment, the community advocates will provide adherence support to all the clients to ensure they are retained on treatment.

Data capturing is a process that takes a pivotal role in the success of the program. It is through accurate and correct data capturing that we yield positive numbers that reflect the work being done at ground level. We have invested in training our Community Based Organizations (CBO) Data capturers with skills that make them employable and help them in assisting their CA’s for better collection of client’s information.

The data collected by our CA’s is put into the CRS online system called FOCUSADS, where it can be analysed and processed into reports, which are sent to the funder monthly, quarterly and annual basis.

State of the project until September

CRS and the Department of Health have assigned 10 Districts to SACBC with very specific targets per each District. The objective was to find approximately 23,000 PLHIV who either do not know their status or are LTFU and link them back to treatment. This target was to be achieved by end of September 2010.

On the ground, the Project has been running since June 2019. During this time, an intensive search was made to identify CBOs in the 10 Districts allocated to SACBC. Due diligence was exercised to ensure that the identified CBOs had good governance systems in place to effectively implement the projects. 25 CBOs have been engaged; each with their own specific budget and target according to their capacity. By the end of September 2019, the total aggregate of target reached by these CBOs was approximately 10,500 PLHIV linked to treatment. This was a great achievement considering that the project had been running for only four months and some of the CBOs were in operation for only one or two months.

Challenges during the project

One of the greatest challenges of the Project was to gain access to health clinics by the CBOs. The best way to find the names of people who are LTFU is by going through the patient lists of clinics within the catchment areas of the CBOs. However, in order to disclose these patient lists, the clinics demanded letters of support from the provincial and district Department of Health offices – which were slow in coming. Therefore the CBOs had to make an extra effort to build relationships with the clinic staff in order to obtain the patient lists and this took valuable time.

Another challenge was that some of the LTFU, as identified in the clinic patient lists, had moved to different locations and therefore it was difficult to trace these people.

Future of the Project

It is with high hope that project will continue until the targets are reached. For now the Project has been extended to December 2019. During this time, the emphasis of the Project is to continue finding the remaining LTFU in order to reach the target as well as to provide adherence support to those who have already been linked to treatment.

Position of the Catholic Church on the Project

Being one of the first institutions in the world which responded with holistic approach towards addressing the problem of HIV/AIDS, Southern Africa Catholic Bishops’ Conference (SACBC) has acquired vast and rich experience of more than 20 years; offering and maintaining unreserved quality service towards addressing the problem of HIV/AIDS and the related effects of the pandemic.

SACBC AIDS Office has won the favour of the international community by being rated as one of the most successful institutions across the globe to alleviate the scourge of HIV/AIDS. The office, in this project, therefore has been once more entrusted with the responsibility of overseeing the management of the project.

Under this particular project about 800 staff members under SACBC are working hard every day to participate in the facilitation of a new dawn of hope in South Africa; the dream whereby HIV/AIDS will forever be a forgotten history among the generations to come.

Catholic Church in Southern Africa also continues to work selflessly in partnership with competent stakeholders to realise that dream whereby South Africa, Africa and the whole world experience the joy of living in a society free of HIV/AIDS.

The Church is hopeful that through many support programs against HIV/AIDS the future of our nation is very bright.